One platform independent of other systems

How is it possible to coordinate five different intranets into one single intranet for more than 2,000 employees from different countries? Excellent, says industrial trading company Alligo.

When the Swedol Group and three TOOLS companies were about to form a joint organisation — Alligo — the pandemic was on the rise. A new organisation with operations in Sweden, Norway and Finland was to be completed within six months without the opportuity to meet and get to know one other properly. Without all the small talk around the coffee machine. The need for information was tremendous, and there was a rush to set up a shared intranet. 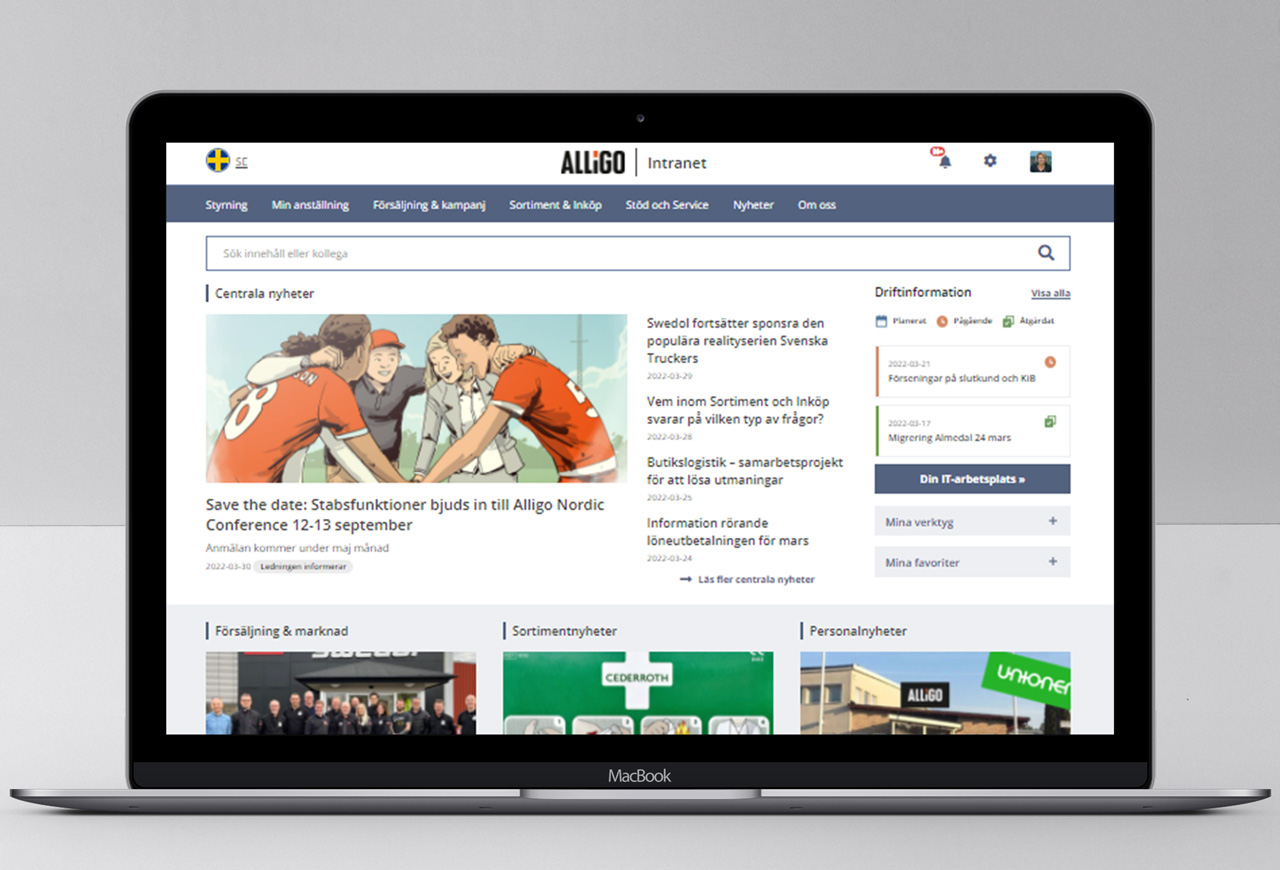 Five existing intranets, on different platforms and with diverse strategies and target audiences, would thus be coordinated into one. And it had to be done quickly.

– It was extremely important for us to get the information out. While we were presenting new managers, plans and strategies for the entire business and explaining what was happening from one day to the next, there was a travel ban between countries. "Our top priority was to create a common platform for the news flow," explains Communications Manager Lovisa Lagerström Lantz.

And it was precisely the time aspect that was the greatest challenge. It was urgent, but...

– ...we succeeded! All involved understood that the chips were down and that we would have to compromise on the loftiest visions to deliver a solution that worked for everyone within the given timeframe.

And part of the solution was to turn to Sitevision.

– We knew it was a user-friendly tool that always ranked highly. We would also gain a platform that worked no matter what other systems the employees were running.

“Aftonbladet of the Employees”

Today, Alligo’s intranet is exactly what it was designed to be — the obvious channel for the flow of information. In both mobiles and laptops. Here you can keep track of what's happening in neighbouring countries as well as what applies to returns and customer service. A smart search function makes it easy to find colleague's contact details, join digital tours and read about and get to know new employees.

What are you most satisfied with?

– The fact that things are happening on the intranet all the time; it has become like the employees’ Aftonbladet. Our employees value it very highly and the frequency of visits is excellent. The intranet holds the company together, and this has been instrumental in building the "we" feeling, which makes me both proud and happy.

A day at our Logistics Centre in Örebro – Swedol/TOOL play

Introducing new customers to Sitevision - the fun and the challenges

The results of dSam are presented – and Sitevision is there

You who already work in Sitevision can log in to take part in the latest news, support, release notes and more.

Go to My PagesOpens in new window.